Half way through the rotation—time is passing quickly!

This past weekend was marked by coming and going of new volunteers. While our guys from the Hospitals of Hope left, we surprisingly received a team of surgeons along with a couple of emergency medicine residents. It was a great addition of much needed skills to help out with the many trauma, tumor, and infectious cases.

Meanwhile, midweek on March 10, 2010 was an observed holiday—Decoration Day. Much like Memorial Day in the U.S., this holiday was a time to remember the dead—the many people who had fallen during the war. Near downtown is a huge public cemetery.

The rest of the week continued to be challenging with lack of manpower, varied and new pathology including tetanus and ascaris, my patient panel with growing number of liver disease patients, etc. The x-ray situation continued to present many setbacks of patients unable to pay upfront for x-rays. Or else if they qualified for free xrays, then it was a matter of not being able to find the stamp of approval for their free x-rays (HIV patients receive free medical care under the Clinton Foundation, after their initial diagnosis and registration into the infectious disease clinic). Or else, pushbacks from technicians about not having enough films. Etc. etc. etc.

Let me say however that despite situations being grim, not all is lost, and really not as depressing and whiny as my blogs may be sounding. Despite not being to run successful codes here for now, there have still been many miraculous and beautiful moments. The gentleman whom I mentioned in my previous blog is about to be discharged, as well as the boy who came in with tetanus—originally so spastic as to resemble almost status epilepticus—now ready to go home and walking on his own. Healing and cures do occur.

And thus, another week went by. Over the weekend, I had some time to get to know more the land and people here. There is also almost a sense of renewed innocence in the city—one that comes from hope after the war? I have not heard much war stories from the people around me, but as I have read before, it was truly a time when “hell on earth” existed. If so, I can understand…who would want to retell and re-live that experience, even verbally. And so, Reconstruction continues.

This weekend also included a visit to the National Liberian Museum. I believe there is a small little blurb about it in the Lonely Planet chapter on Liberia. The exterior of the museum building was colonial appearing. However, as I stepped inside, I found a large room sparsely filled with scattered items. It was pretty sad at first sight. Nevertheless, my friends and I struck up a conversation with a tour guide who met us at the door. Systematically, he showed us significant wooden furniture pieces belong to the country’s past presidents. We also saw old currency—thin metal sticks of varying lengths, made from iron, bronze, or gold, twisted at both ends—used before the introduction of the Liberian paper dollar. I can’t imagine trying to carry those things around. Other items around the room included a very old flag (Monrovia used to be called Christopolos or “city of Christ” and the very first flag of Liberia was with a cross on it. Later the capital was changed to its present name, after US President Monroe.), masks, clothing, and couple of communication drum (back in the days before telecommunication existed, people were called to the town center via communication drums placed strategically at interval distances away from town and as one drummer hears the original drum sound, he would hit his drum, and so on). 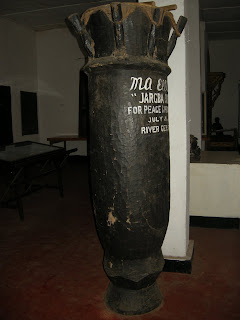 At the very end of our tour, we had a nice little traditional African music concert with the xylophone and samba drum . 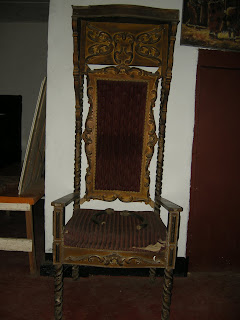 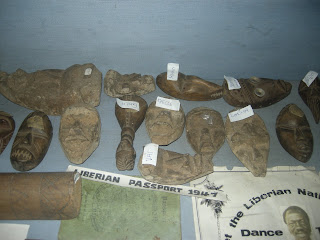 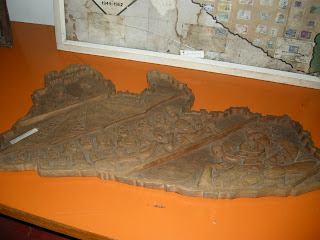