This week, besides the usual clinical happenings with my colleagues and I back at the hospital with urgent pericardiocentesis, chest tube insertions, and code blues, there were several highlights also worth mentioning.

This was quite an honor and an unexpected event during my trip.  The President of Liberia (Madam President Sirleaf) invited all the HEARTT volunteers to the president’s house for a reception.  I felt almost a bit starstruck to meet her. Overall, it was a very enjoyable evening of conversation and hors d’oeurves by the poolside.  Though she had served in many high political and corporate positions and now acts as Liberia and Africa’s first female president, I was impressed with her down to earth mannerism and genuine concern for the reconstruction of her country in all aspects.

Also at the President’s house, I was introduced to a local staple food, fufu. I had read about this dish in the book The House at Sugar Beach, where the author described it more as a food eaten during time of starvation as it’s high in carbohydrate. Per a quick search on wikipedia, “variants of the name include foofoo, foufou, foutou. It is a staple food of West and Central Africa. It is a thick paste usually made by boiling starchy root vegetables in water and pounding with a mortar and pestle until the desired consistency is reached.”

“Fufu is actually originally from Ghana from the Asante ethnic group. Settlers and migrants from India, Togo and Ivory Coast discovered it and modified it in their accord. The original word is ‘fufuo’. The word means two things. (1) The color after it is prepared is usually white and white in Asante language (asante twi) is fufuoop (silent p). (2) The manner in which it was made. The process is called fu-fu (pounding) and that is why they came up with the name fufuo.”

It was definitely filling and distinct with a slight sour-vinegar taste to it. I’m not readily going to call it my favorite.

Since the end of its civil war, Liberia has yet to attract much tourism.  Yet, if the tourism industry is to take flight, likely one of the top 3 places to visit (it already has its place in the Lonely Planet chapter on Liberia) will be Robertsport, a seaside village and former resort.  There still stand the ruins of what use to be a grand resort hotel.  Now, there are several motels by the beach attracting an ecclectic crowd every weekend.  My friends and I stayed at the NaNa’s lodge (eco friendly, Glamping —apparently a new term for glamorous camping). Liberia has beautiful beaches.  And the waves are incredible—if only I know how to surf! 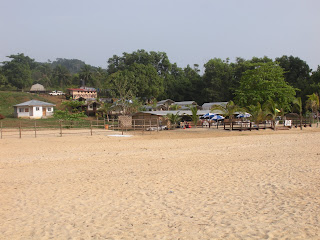 Every tent has an ocean view. 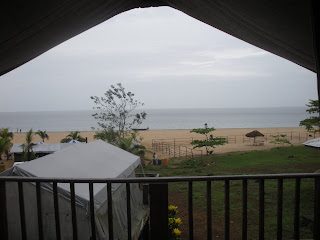 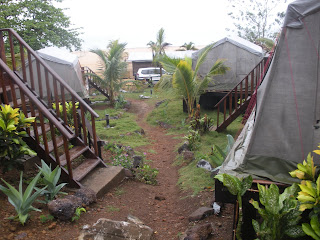 The best and freshest tasting fish I have ever tasted in my life! It was caught just that morning by the staff of the lodge and then prepared for lunch. Yum! 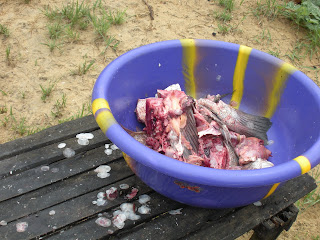 After lunch, we packed ourselves back into the van and off for our return to Monrovia for another week of exciting work (but sadly also nearing the end of my trip)!  Thus ended our 30 hours excursion, nevertheless that was revitalizing, much needed, appreciated, and unforgettable!