It’s been over a year since my return from Liberia. As I approach the end of my residency training, my Liberia trip will definitely be one of the unforgettable highlights of the past 3 years. Again, I am so thankful for the incredible opportunity and support from the Kaiser Global Health Program and Yale/Stanford Johnson and Johnson Global Health Scholars Program.  I hope that the medical students and residents reading this blog (and even non medical readers) will seriously consider doing an international elective, medical missions, or some kind of volunteering trip abroad that will truly enrich your practice as a clinician.  Thank you also to other current KP residents for sharing all of your memorable stories and experiences of times abroad.

This will be my last official blog about my Liberia trip that took place during Spring 2010.   In my last entry, I left off at the part of my trip where my teammates and I had the honor to meet with Liberia President Ellen Johnson-Sirleaf.  Thereafter, we also briefly traveled off the beaten track to marvel at the beautiful land and seascape of Robertsport.

So it was, energized and ready to head back to the hospital for the final 2 weeks of my trip.  Knowing that the remaining time will pass quickly, I treasured, even more so, each moment of working with the staff I have come to know dearly and of seeing the patients whose conditions were now more familiar to me despite not having the diagnostic tools so easily at my disposal as I would have back at home. My patient panel had grown to become a TB service with pleural effusion +/- chest tubes, advance liver disease, pneumonia, cellulitis, and HIV w/ a few presenting with kaposi’s…seemingly not a very good outlook.  And some patients inevitably died.  However by that time, I had come to terms with the limitations of what the system could provide.  And systems issues take time to change.  Thus in a setting of what I have termed “medical poverty” (vs. “medical abundance” whereby there is more than enough of the basic medical support in infrastructure, persons, and supplies to treat all general medical conditions)—and similar to what many other residents on the KP Global Health Blog have already noted on the theme of limitations and humility—there is the realization that the art of medicine goes so much more beyond simply offering curative treatment. How much more can be offered by compassion, a listening ear, and the human touch. Below are a few more anecdotes.

In the middle of the night, an old man was admitted onto the hospital ward, accompanied by his young son.  The patient had apparently not been eating well for the past week or so and was then very weak and confused. He had also stopped urinating for many days. Long story short, renal failure was suspected with major electrolyte abnormalities. No labs available. Hemodialysis did not exist.  Patient was treated under comfort measures only and passed away the next day.

Events are perhaps not as scary when it is expected and not a surprise. And somehow, I felt more at peace with his death than any other I had encountered up until then (though still, any patient’s death is never “easy to deal with”).   It led me to think how much good could potentially come out of a palliative care service/hospice at the hospital and community.  If we cannot cure them of their diseases, at least we can lessen their suffering and preserve their dignity at the end of life.

Only a few times in my training have I treated prisoners who were still serving their sentence, sometimes handcuffed, and under the watch of nearby guards as they come into the hospital for treatment. This patient came to the hospital with right upper quadrant abdominal pain and a known history of hepatitis C. He was treated for acute hepatitis. As he clinically improved, he however continued to complain of mild lingering pain despite pain medicines given. Upon further questioning, it turned out he did not want to return to prison and thus had hope to delay his discharge but complaining of pain.  Being such a subjective experience, he still very well could have had pain, but likely, it was another sort of pain he had—one related to the trauma and injustice he had experienced—per his account.  And thus, what I did offer was a listening ear to hear out his story and offering hope and comfort as best as one human being could offer to another fellow human being while in one of life’s troughs. Unfortunately for this prisoner, because he was clinically improved and his acute abdominal pain was resolved, he had to be discharged back to prison.

Every so often, the NGO community in Monrovia would come together at a chosen restaurant for a game night. A fee is paid by each participating group that ultimately goes to the winner’s charity/NGO of choice.  Typical of any city that has undergone unrest requiring UN involvement, the capital city was infiltrated with NGOs.  Within a 5 blocks radius around the hospital, there must have been at least over 30 NGO offices dotting every street corner.  During my time there, the Spain MSF (doctors without borders) announced their planned withdrawal from the country.  Often times, the hardest part after a country crisis is not the acute stabilization but instead, the long term rebuilding of a community/nation whereby it once again becomes self maintaining/self-sufficient.  Think of all the attention Haiti received after the earthquake.  Where do things stand now?

Somewhat conspicuous in their operation around the hospital, was a group of medical professionals from China.  They came during a hospital development phase when medical teams from other countries came to help out. Of the different teams, they stayed behind and opened a clinic in the city offering treatments of acupuncture, moxibustion, and other traditional Chinese medicine remedies.  One of the doctors on that team gave an interesting grand rounds presentation on meridians and acupoints.  The speaker claimed that there were apparently over 600 diseases of internal medicine, pediatrics, ob/gyn, and ENT (ear, nose, throat) that could be treated with acupuncture! Of all places in the world, what a pleasant surprise to find the use of complementary/alternative medicine when traditional allopathic medicine can only offer so much.

Another off the beaten track activity. My teammates and I ventured through near 2 hours of absurdly rugged dirt roads to the infamous Marshall Island.  Our interest in this place was based on a just-as-ridiculous mythical story of the “one arm ape” that lived one of the islands.  Scientists use to conduct animal experimentation on these islands. However, during the civil war, the scientists fled and the apes remained.  At this point, the story became a bit muddled for me. It was not clear whether the one arm ape came about due to a scientific experiment gone wrong or that the ape unfortunately caught a grenade-having mistaken it for food. Anyhow, fortunately we did not catch sight of any apes missing any limbs. They were quite huge—size of 2.5 to 3 average-sized man put together! I’m glad they were friendly.

And finally, the bittersweet day of my departure from Liberia had arrived.

Some of my final thoughts that day as I remember and looking back at my journal entry that day:

1) Next project: think about how to start an adult chronic condition clinic there (for ongoing hypertension, stroke, diabetes patients)

2) Would love to start an inpatient rehab program

3) Maybe in the future…hospice/palliative care service?

Thank you to my teammates, local colleagues, to the patients and their families, and many new friends met along the way, for making my experience as enriching as it was and for helping me see the beauty, strength, and hope of the land and people despite all challenges. 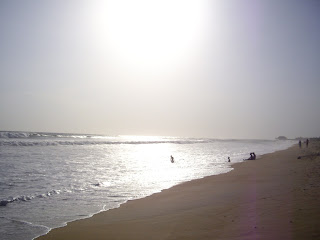